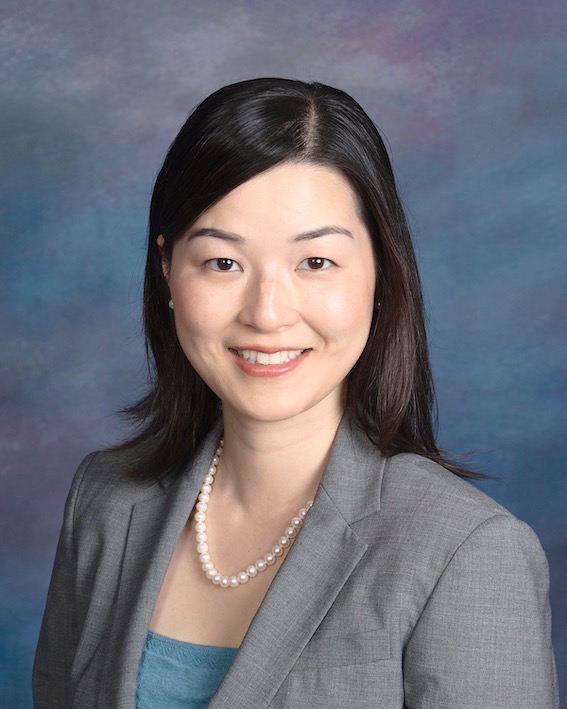 Dr. Satake was born in Japan and moved to North Carolina with her family in her middle school years.  After graduating from high school, she attended the University of North Carolina at Chapel Hill (UNC-CH), where she skipped her senior year and was admitted to the University of North Carolina School of Dentistry (now UNC Adams School of Dentistry).  After completing her Doctor of Dental Surgery degree in 2006, she attended the University of California Los Angeles (UCLA) Hospital Dentistry Residency (General Practice Residency) where she treated medically compromised patients, performed dentistry in operating rooms, and performed dental consultations for heart-transplant patients within UCLA Medical Center and Children’s Hospital Los Angeles.  Dr. Satake first joined Narita Family Dental in 2007 and worked in their Torrance office for 8 years.

Dr. Satake briefly left Narita Family Dental when her husband moved her family to Orange County.  However, she still keeps up her skills as a dentist all the while raising their children.  In the latter half of 2020 when schools closed due to COVID-19, she stayed home to help her children learn via online-schooling.  She is happy to re-join Narita Family Dental in 2021, this time to serve the patients in the Costa Mesa office.

Dr. Satake values long-lasting quality treatment and patient education.  Outside of her dental practice, Dr. Satake enjoys spending time with her husband and two young daughters (ages 8 and 5), and volunteering for her daughter’s school PTA. 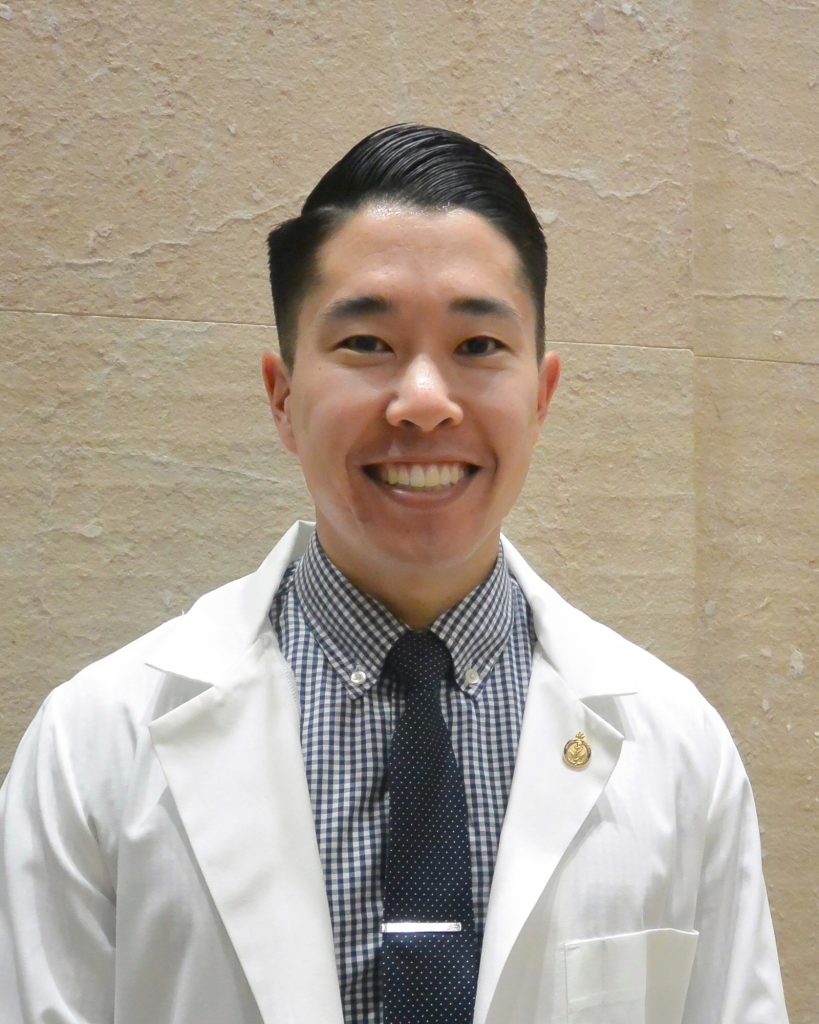 Dr. Robb Kaneko was born and raised in Torrance, California. He graduated from the University of California, Irvine (UCI) where he received his undergraduate degree in Biological Sciences. He then moved to New York where he received his Doctor of Dental Surgery degree from New York University College of Dentistry (NYUCD). After graduating, Dr. Kaneko completed a one-year NYU Langone residency program in Honolulu, Hawaii, where he treated patients at a community clinic in the neighborhood of Kalihi.

Dr. Kaneko is a general dentist who strives to provide the best possible care to patients of all backgrounds in a caring and compassionate manner. In his free time, he enjoys playing with his dog, golfing, traveling, trying new restaurants, hiking, and photography. 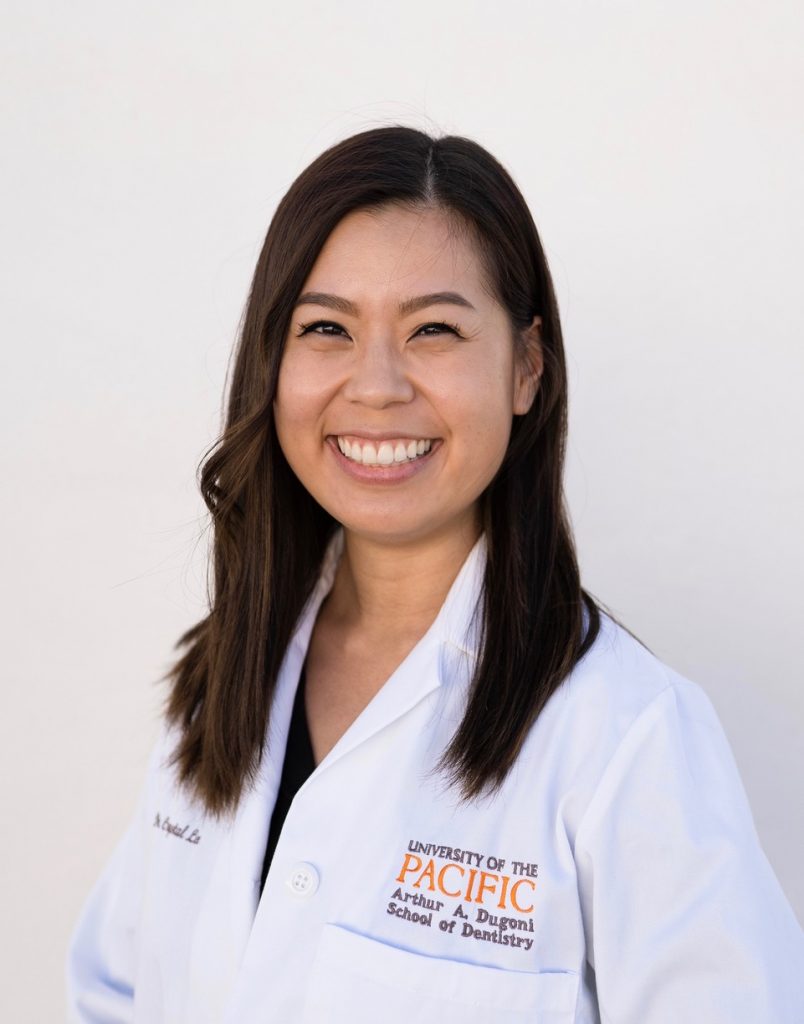 Dr. Crystal Lee was born and raised in Southern California.  Growing up, she did not have good experiences at the dental office and recognized the need for friendly and relatable dentists.  To fulfill her goal, she completed the six year dental program at the University of the Pacific and received her Bachelors of Science (B.S.) in Biology and her Doctor of Dental Surgery (D.D.S.) degree.  She attended a 1 year Hospital Residency program at the UCLA School of Dentistry, where she helped treat severely medically compromised and special needs patients.

Dr Lee strives to be an approachable and empathetic dentist and is dedicated to improving her patients’ oral health.  She hopes to be able to create a comfortable environment for her patients in which they will be able to build confidence in their smiles.

Dr Lee enjoys spending time with her husband, who is a pediatric dentist.  She is enjoying married life spending time and going out to eat with him. 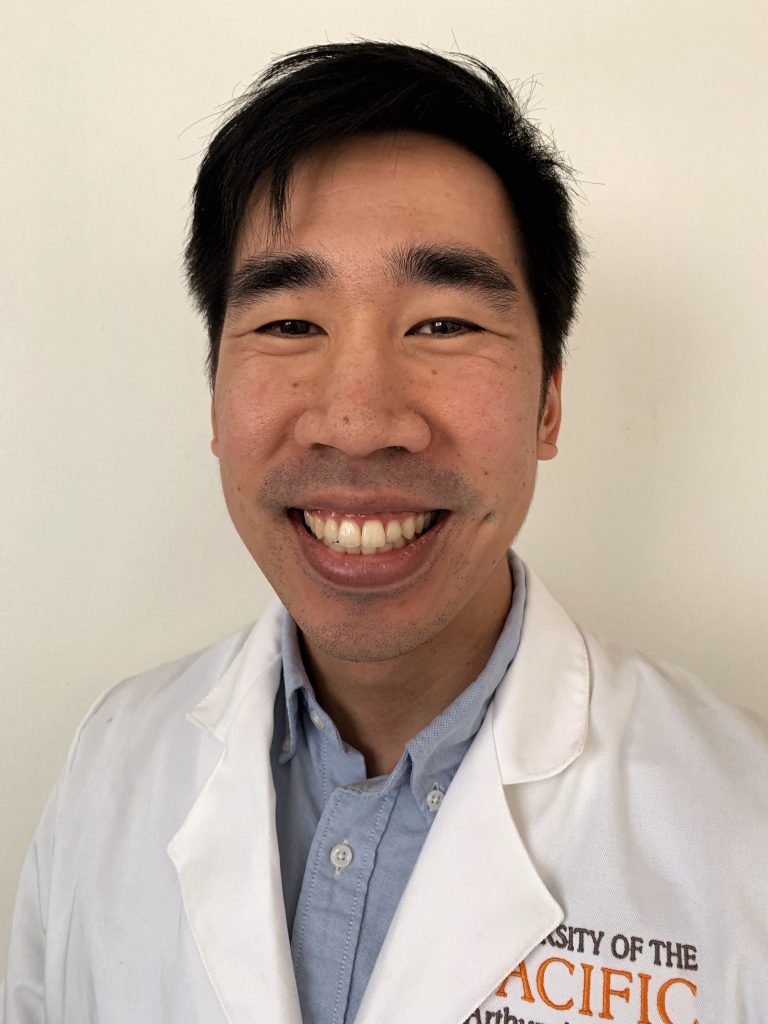 Dr. Jeffrey Okamoto was born and raised in Southern California.  He received his undergraduate degree in business economics from University of California, Irvine.  He later attended the University of Pacific School of Dentistry in San Francisco, where he received his Doctor of Dental Surgery degree in 2016.  After graduating, he stayed on as part-time faculty at the dental school and worked as a dentist in a community clinic in the Mission District of San Francisco.

Dr. Okamoto later moved back to Souther California, where he has been working as an associate dentist in private practice.  His mission is to provide comprehensive and personalized care to all patients.  In his free time, he enjoys traveling, cooking, and exploring teas from around the world. 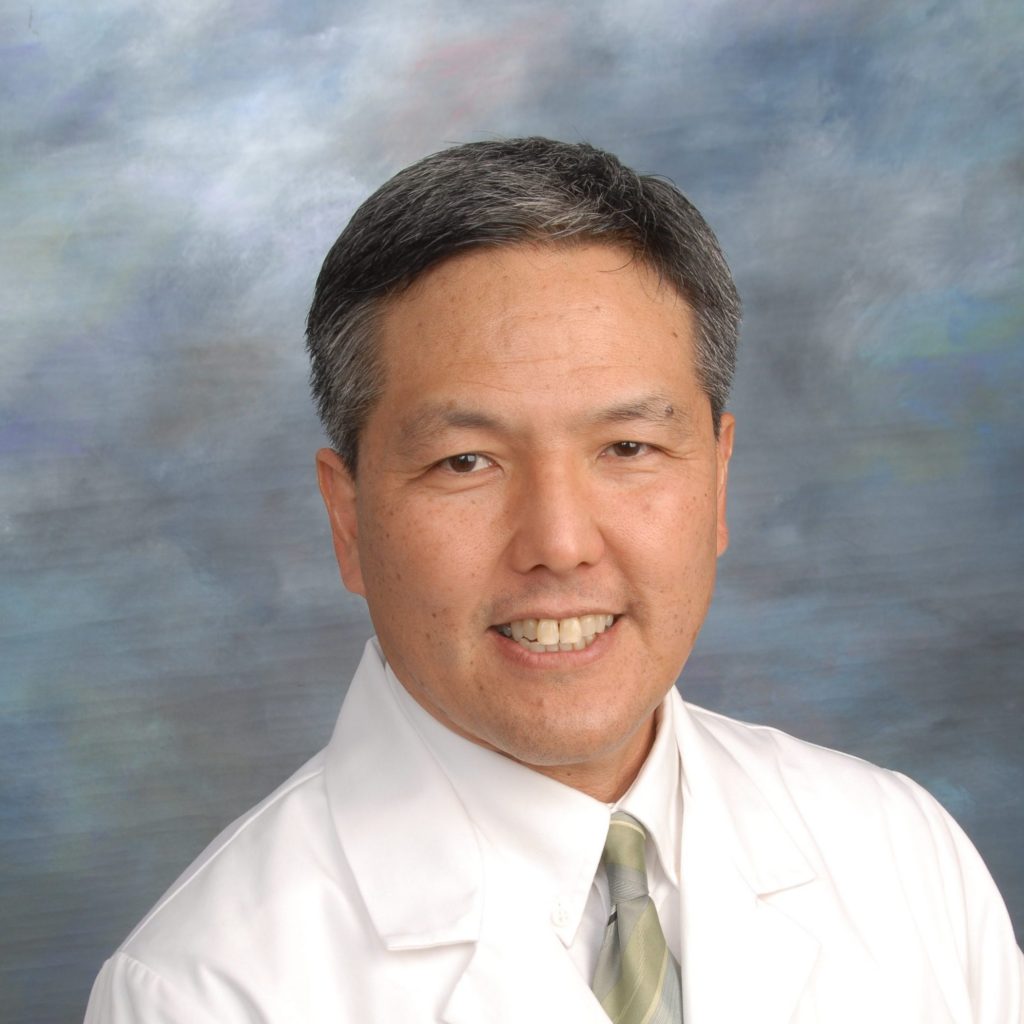 Dr. James Kodama is a nisei, born and raised in the San Gabriel Valley. His parents immigrated from Kagoshima, and the family still has many relatives in Japan. Dr. Kodama studied Biochemistry as an undergraduate at the University of California, Los Angeles (UCLA) and received his Doctorate of Dental Surgery at the University of Southern California (USC) in 1988.

Dr. Kodama provides dental care to underserved populations, such as children in foster homes and people with disabilities, as well as to a large geriatric clientele. He also was able to serve on a dental mission trip to an orphanage in Nanning, China. He is aiming for another 20 years of dentistry! Dr. Kodama’s obsession is to ensure that every patient receives the best possible care along with a perfect natural smile.

A dedicated family man with a wife and 3 daughters, Dr. Kodama has 30 years of general dentistry experience. His hobbies are spending time with his family, traveling and fishing. 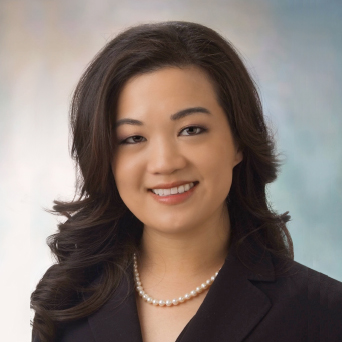 Dr. Stacey Woo grew up in Orange County, CA. She graduated from Stanford University and University of California, Los Angeles (UCLA) School of Dentistry, where she completed an intensive DDS-PhD program in Oral Biology. She earned a Certificate of Endodontics and completed a postdoctoral research fellowship at the University of Missouri, Kansas City.

Dr. Woo joined the Narita Family Dental team in 2013. As an endodontist, Dr. Woo specializes in the care and treatment of the tooth nerve and root canal system. She prides herself on being professional and gentle while working closely with the other dentists at Narita Family Dental.

Outside of work, Dr. Woo loves spending time with her family. 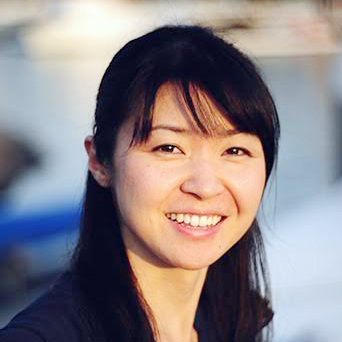 Dr. Kana Sato joined the team at Narita Family Dental in 2011. As a general practitioner, Dr. Sato focuses on providing comprehensive dental services with an emphasis on preventive care. She is bilingual in both Japanese and English.

When she is not seeing patients, Dr. Sato enjoys her leisure time traveling, hiking, and spending time with family and friends. 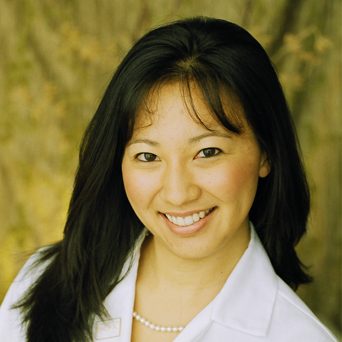 Dr. Valerie Harada was born and raised in Los Angeles. After graduating from the University of California, Los Angeles (UCLA) with her undergraduate degree in Psychobiology, Dr. Harada attended the University of the Pacific (UOP) School of Dentistry in San Francisco. She is really passionate about teeth and how to keep them healthy. Working at Narita Family Dental since 2010 has been great for her. All of the patients have such interesting backgrounds and stories to tell, and she enjoys listening to them.

In her free time, Dr. Harada enjoys spending time with family and friends. She also loves cooking, gardening, and is a foodie, always on the hunt for the best ramen and open to trying new foods! 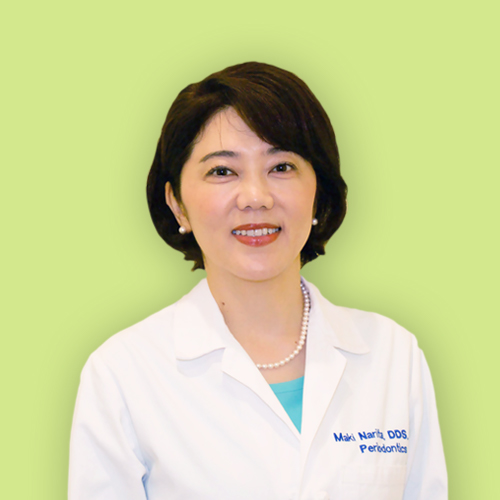 Dr. Maki Narita is a board-certified periodontist (specialist for gum surgery and dental implants) licensed to practice in California, Texas, and Japan. After graduating from St. Maur International School in 1988 with an International Baccalaureate Diploma, Dr. Maki Narita attended Showa University School of Dentistry in Tokyo. Upon graduation, she continued her studies in dentistry by moving to Los Angeles, CA where she received her D.D.S. (Doctor of Dental Surgery) from University of Southern California (USC) School of Dentistry in 1998. While working as an associate dentist at several offices, Dr. Maki also served as a part-time clinical instructor at USC School of Dentistry. In 2001, Dr. Maki and her sister Dr. Mie Narita established Narita FamilyDental, which to this date successfully operates with offices in Torrance and Costa Mesa, CA.

Dr. Maki has also been involved in interpretation and translation services specializing in dentistry since 1997. Drs. Maki and Mie founded Global Harmony to offer consecutive and simultaneous translation services for both English and Japanese speaking dentists at universities, conventions, and meetings, as well as logistical services to dental seminars for Japanese dentists. After being a general dentist for 12 years, Dr. Maki decided to specialize in periodontics and successfully completed the Postgraduate Periodontics Program at University of California, San Francisco (UCSF) with a Masters of Science Degree in Orofacial Sciences in 2013. Since then, she has been appointed as lecturer to teach 3rd and 4th year dental students at the University of California, Los Angeles (UCLA) School of Dentistry Section of Periodontics. Dr. Maki was also appointed as lecturer at her alma mater, Showa University School of Dentistry Department of Orthodontics in 2014.

Besides practicing periodontics/dentistry and teaching dental students, Dr. Maki enjoys spending time and playing golf with her husband Rick and her daughter Miyuki. 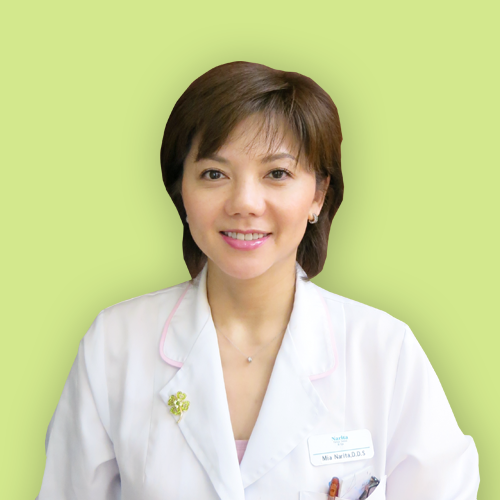 Dr. “Mia” Mie Narita was born and raised in Yokohama, Japan. She attended St. Maur International School from preschool to middle school. She then spent her high school years in Missouri. She graduated from the University of Southern California (USC) School of Dentistry in 1993. Dr. Mie taught dental students as a teaching assistant in her 4th year then later worked as a clinical instructor in the Special Needs Patient Clinic and Pre-Clinical Prosthodontics Department for over 3 years. Additionally, Dr. Mie worked for other dental facilities including an esthetic/cosmetic dental office in Beverly Hills, Children’s Dental Center at Long Beach Memorial Hospital, community clinics for the underserved, and private dental offices before opening Narita Family Dental in 2001 with her sister, Dr. Maki Narita.

Besides her work in clinical dentistry, in 1997 Drs. Mie & Maki Narita founded Global Harmony Inc., an interpretation and translation services company, specializing in consecutive and simultaneous translation services for both English and Japanese speaking dentists at universities, conventions, meetings, as well as logistical services to dental seminars for the Japanese dentists.

Dr. Mie’s second love is music, including playing the piano and singing. When time allows, Dr. Mie enjoys playing golf, baking, gardening, and spending time with her husband and her adult children, whenever they have time away from their careers and college.

For your convenience please print and fill out your patient registration forms, and bring them with you to your first visit. Download forms here.

We use cookies on our website to give you the most relevant experience by remembering your preferences and repeat visits. By clicking “Accept”, you consent to the use of ALL the cookies.
Do not sell my personal information.
Cookie SettingsAccept
Manage consent

This website uses cookies to improve your experience while you navigate through the website. Out of these, the cookies that are categorized as necessary are stored on your browser as they are essential for the working of basic functionalities of the website. We also use third-party cookies that help us analyze and understand how you use this website. These cookies will be stored in your browser only with your consent. You also have the option to opt-out of these cookies. But opting out of some of these cookies may affect your browsing experience.
Necessary Always Enabled
Necessary cookies are absolutely essential for the website to function properly. These cookies ensure basic functionalities and security features of the website, anonymously.
Functional
Functional cookies help to perform certain functionalities like sharing the content of the website on social media platforms, collect feedbacks, and other third-party features.
Performance
Performance cookies are used to understand and analyze the key performance indexes of the website which helps in delivering a better user experience for the visitors.
Analytics
Analytical cookies are used to understand how visitors interact with the website. These cookies help provide information on metrics the number of visitors, bounce rate, traffic source, etc.
Advertisement
Advertisement cookies are used to provide visitors with relevant ads and marketing campaigns. These cookies track visitors across websites and collect information to provide customized ads.
Others
Other uncategorized cookies are those that are being analyzed and have not been classified into a category as yet.
SAVE & ACCEPT